NCS_HypogeanCity is a 32 channel, multi-room sound installation developed for the niches and ledges in the soft Tufo limestone walls of the Casa Cava performance venue in Matera, Italy. The work consists of 3 movements corresponding with layers in time and carbonate erosion of the Tufo.

Matera, Italy is considered to be one of the oldest cities in the world with distinctive cave-like dwellings carved out of limestone. Called "Tufo" by inhabitants of the region, this soft stone consists mainly of calcium carbonate, a chemical compound of the elements calcium, carbon, and oxygen, laid down as sediment millions of years ago. Over time, spaces have been hollowed out through the flow of water and human hands, extending back into a layered history.

NCS_Hypogean-City is a multi-room sound installation of spatialized electroacoustic miniatures. Its textual characteristics and dramaturgical progressions are built upon the sonification of the area's timeline, geological data, and both the symbolic and numerological aspects of calcium, carbon and oxygen: Ca (20), C (6), O (8). Through the dynamic placement of small-scale loudspeaker systems new (sound) connections are created within the space that artistically reflect Matera's geologically unique setting and stimulate the cave acoustics of the Casa Cava.

2019 Between 2019 Festival for Art Science and Technology, Royal College of Music, Stockholm SE
2019 IN VITRØ Festival, Casa Cava, Matera IT 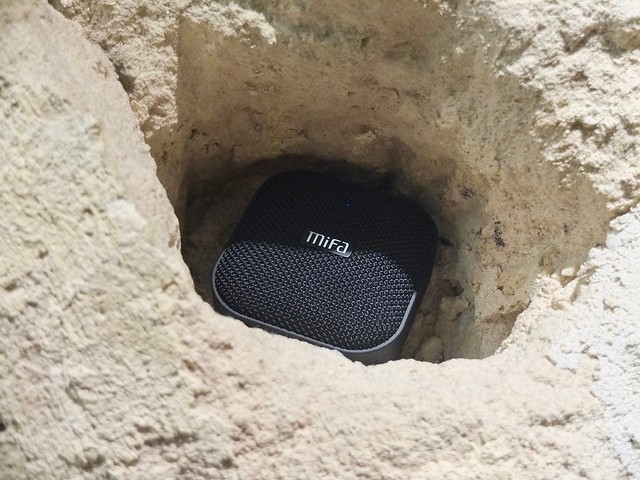 A decentralized approach toward multi-channel spatialization was chosen in order to simplify the equipment required as well as allow for a greater integration of the speakers into the physical space. 32 small, self-contained loudspeakers with integrated SD card playback were chosen as a cheap, off the shelf solution. Additionally, the entire set up can fit in a suitcase and run for 8-10 hours before needing to be recharged.

For NCS_HypogeanCity, the simplest solution was chosen: playback is started manually on each device, one after the other, and begins with 4 count used to help cue the next device. As start times are staggered, per-channel intro and outro silence are generated in order to ensure that all sound content starts at roughly the same time after the last device in the sequence is started.

A set of scripts was developed to automate multi-channel audio processing, staggered intro/outro generation, and copying files onto multiple speakers plugged into a 13-port USB hub. Using these tools, adjustments to the compositions could be made and the entire piece re-generated and copied onto all 32 speakers in about 30 minutes.

This project was exclusively developed in 2019 for IN VITRØ - artificial sønification as part of the Interfaces Project, co-funded by the Creative Europe Programme of the European Union.