Trust Me: call the GOLDEN ASS on the red phone & argue for a drink

A cocktail robot inspired by the then President-elect of the United States, Trust Me is a belligerent GOLDEN ASS who hears what he wants and gives you what HE thinks is best. Sometimes you get what you want from the menu of over 40 available cocktails and sometimes you don't, but it will always be TREMENDOUS. Trust me.

A project in collaboration with Anika Hirt

Built for and presented at the Roböxotica Festival for Cocktailrobotics in Vienna Austria, Dec 8-11 2016

Trust Me is an interactive chatbot which uses speech recognition and text to speech to communicate with users requesting drinks from it's menu. Like contemporary voice bots and autocorrect technology, he doesn't quite understand everything and often chooses what he wants to hear. Originally begun as the Autocucumber project centered around erroneous autocorrect software used on today's smart phones, the core concept of the robot shifted in response to the outcome of the 2016 US Presidential election. The chosen candidate shares many of the traits of our current app-centered, less-than-utopian dream and his real-world quotes comprise the majority of the chatbot's script:

Built using Arduino, Processing, the CMU Sphinx4 speech recognition library, Charles Hayden's Java implementation of the Eliza chatbot, and the Apple TTS say command. The physical robot consists of an Arduino, a set of peristaltic pumps & light controlled by a relayboard, many meters of food grade tubing, and a pulsating inflatable mylar shell.

MuseumsQuartier Blog interview Dec 7 2016: Trust Me – You Will Get What I Want 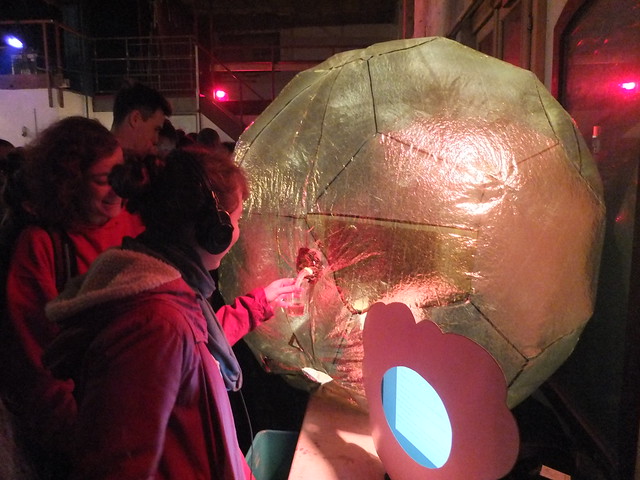 Thanks to Johannes, Frankie, and everyone at monochrom